Your student ID gives you access to even more amazing resources from the King County Library System!

Big NEWS from the library for your Summer Reading! LWSD ebooks are now available for summer check out via Sora from Overdrive! Use this link for directions on how to access the very latest and best books available to LWSD secondary students. You can also access Sora via the Office 365 Waffle.

So many great books here and no long holds lists like at KCLS. You can use the Sora app to read on your mobile device or kindle! You can even get a head start on all Battle of the Books titles! Need more information? Click here. Email Mrs. Haggerty if you need help.

Download a PDF for more info about LWSD ebooks

Click here for the LWSD Database Links. From home, students will need usernames and passwords to access these databases. These passwords are listed in the Library Notebook accessible on Teams as well as instructions for accessing KCLS databases.

Please email Mrs. Haggerty and Mrs. Harden if you are having issues with your laptop. Depending on the problem, we may be able to troubleshoot for a fix quickly or submit a HelpDesk ticket for you. You can also call the main office and they will forward your call to one of us during school hours 8:00-4:00

For more information and tech FAQ's please visit the LWSD Technology Help Page  and more detailed information is in the Laptop Handbook. Once in person school resumes, students may stop by the library for drop-in laptop help.

We encourage students to register your password in the event you have difficulty logging in to your student account. Process is simple and quick! We can help you reset your password in the library, but doing this process ahead of time will mean you're never locked out! Locked out? Here's the link to access Password Recovery.

The district is working with Worth Ave Group to offer students optional insurance for laptops. More information about insurance can be found on the Worth insurance portal. Laptop repairs can be expensive, please review the laptop handbook for more information.

A parent or guardian may opt out from checking out a district laptop if they have a preferred device already available for the student’s schoolwork that better meets personal circumstances. Please note that LWSD student laptops may at times offer additional resources or closer alignment of software experiences between teacher and student.

Students in Grades 6 and 9, and new ICS students: Please download and sign the appropriate copy of the Student/Parent Laptop Agreement Form and drop it off at the school or email to Mrs. Peterson. Forms can be found on the LWSD Technology Page.

Need help finding just the right book? Here are some links to get you started. Please note that  we are a middle, not all books on these lists are right for every student. Check the age level recommendations to make sure a book is right for you.

What Should I Read Next Bookfinder

Battle of the Books is a cooperative effort between Inglewood, Rose Hill, Kirkland,Evergreen, Redmond, International Community and Timberline Middle Schools. This program allows 6th, 7th, and 8th graders in each school to work together as a team and challenge other schools to correctly answer questions about the selected books. The goal is to encourage students at all reading levels to engage in teamwork while reading some of the best in children’s literature. Challenge questions are based on specific and factual information within the books.

Permission Form: Please have your Adults fill out this form to participate.

Traditionally, the KiMS building challenge would be held in February with the top team from each middle school proceeding to the Lake Washington School District challenge in early March. This plan may change with COVID-19 safety measures. District librarians will wait for guidance from the district before finalizing plans for the District Challenge in 2021. 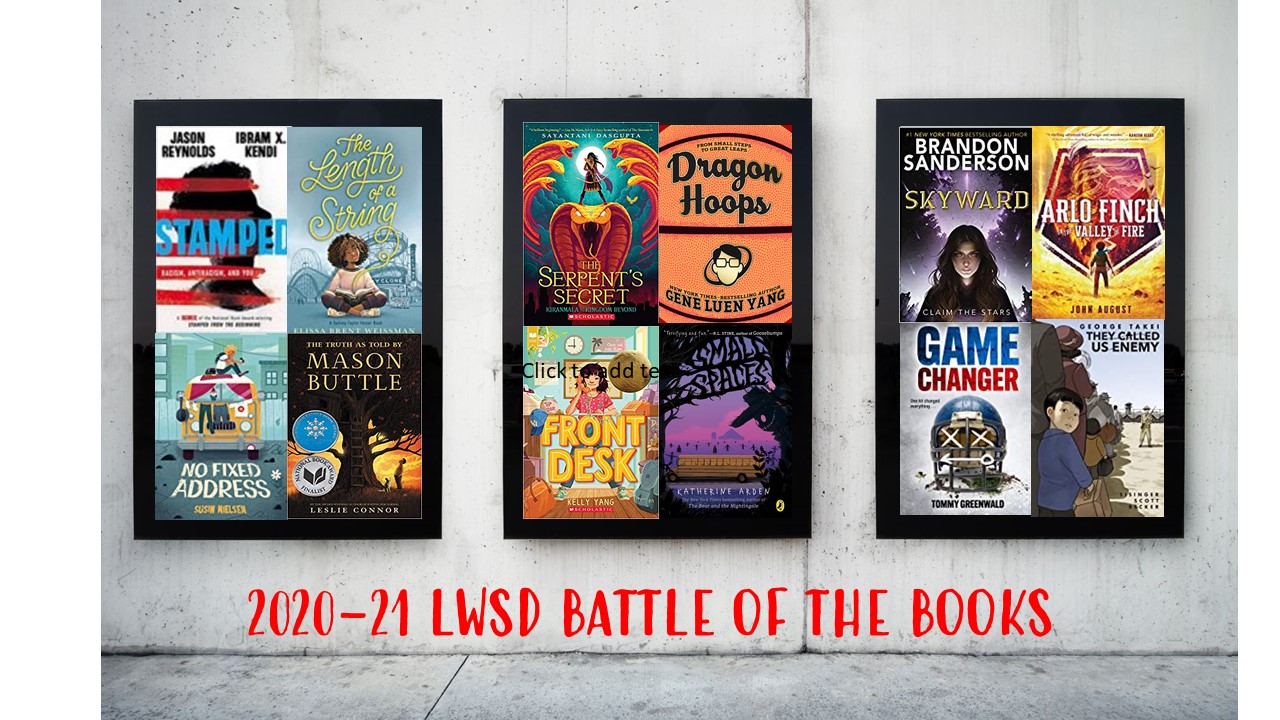 Dragon Hoops by Gene Luen Yang (Graphic Novel): Gene understands stories―comic book stories, in particular. Big action. Bigger thrills. And the hero always wins. But Gene doesn’t get sports. As a kid, his friends called him “Stick” and every basketball game he played ended in pain. He lost interest in basketball long ago, but at the high school where he now teaches, it's all anyone can talk about. The men’s varsity team, the Dragons, is having a phenomenal season that’s been decades in the making. Each victory brings them closer to their ultimate goal: the California State Championships. Once Gene gets to know these young all-stars, he realizes that their story is just as thrilling as anything he’s seen on a comic book page. He knows he has to follow this epic to its end. What he doesn’t know yet is that this season is not only going to change the Dragons’s lives, but his own life as well.

The Truth as Told By Mason Buttle by Leslie Connor(Realistic/Mystery): Mason Buttle is the biggest, sweatiest kid in his grade, and everyone knows he can barely read or write. Mason's learning disabilities are compounded by grief. Fifteen months ago, Mason's best friend, Benny Kilmartin, turned up dead in the Buttle family's orchard. An investigation drags on, and Mason, honest as the day is long, can't understand why Lieutenant Baird won't believe the story Mason has told about that day. Both Mason and his new friend, tiny Calvin Chumsky, are relentlessly bullied by the other boys in their neighborhood, so they create an underground club space for themselves. When Calvin goes missing, Mason finds himself in trouble again. He's desperate to figure out what happened to Calvin, and eventually, Benny. But will anyone believe him?

Front Desk by Kelly Yang(Realistic): Recent immigrants from China and desperate for work and money, ten-year-old Mia Tang's parents take a job managing a rundown motel in Southern California, even though the owner, Mr. Yao is a nasty skinflint who exploits them; while her mother (who was an engineer in China) does the cleaning, Mia works the front desk and tries to cope with demanding customers and other recent immigrants--not to mention being only one of two Chinese in her fifth grade class, the other being Mr. Yao's son, Jason.

No Fixed Address by Susin Nielsen (Realistic): Twelve-year-old Felix's appearance on a television game show reveals that he and his mother have been homeless for a while, but also restores some of his faith in other people.

The Serpent’s Secret by Sayantani DasGupta (Fantasy): Up until her twelfth birthday, Kiranmala considered herself an ordinary sixthgrader in Parsippany, New Jersey, but then her parents disappear and a drooling rakkhosh demon shows up in her kitchen, and soon she is swept into another dimension, full of magic, winged horses, talking birds (very annoying), and cute princes--and somehow Kiranmala needs to sort it all out, find her parents, and basically save the world.

The Length of a String by Elissa Brent Weissman (Historical Fiction): Twelve-year-old Imani, the only black girl in Hebrew school, is preparing for her bat mitzvah and hoping to find her birthparents when she discovers the history of adoption in her own family through her great-grandma Anna's Holocaust-era diary.

Skyward by Brandon Sanderson (Science Fiction): When a long-term attack against her world by the alien Krell escalates, Spensa's dream of becoming a pilot may come true, despite her deceased father being labeled a deserter.

Stamped: Racism, Antiracism, and You by Jason Reynolds (Non-fiction:) A history of racist and antiracist ideas in America, from their roots in Europe until today, adapted from National Book Award winner Stamped from the Beginning

Game Changer by Tommy Greenwald (Sports): While thirteen-year-old Teddy fights for his life after a football injury at training camp, his friends and family gather to support him and discuss events leading to his coma. Told through dialogue, text messages, newspaper articles, transcripts, an online forum, and Teddy's inner thoughts.

Small Spaces by Katherine Arden (Fantasy): After eleven-year-old Ollie's school bus mysteriously breaks down on a field trip, she has to take a trip through scary woods, and must use all of her wits to survive. She must stick to small space.

Arlo Finch in the Valley of Fire John August (Fantasy/Realism): Arlo Finch is a newcomer to Pine Mountain, Colorado, a tiny town of mystery and magic, but he's already attracted the attention of dark and ancient forces. At first he thinks these increasingly strange and frightening occurrences are just part of being in Rangers, the mountain scouting troop where he learns how to harness the wild magic seeping in from the mysterious Long Woods. But he soon...finds himself at the center of a dangerous adventure, where he faces obstacles that test the foundations of the Ranger's Vow: loyalty, bravery, kindness, and truth.

They Called Us Enemy by George Takei (Non-Fiction/Graphic Novel): Actor, author, and activist George Takei recounts his childhood imprisoned within American concentration camps for Japanese Americans during World War II and the impact the experience had on his later life.

Do you use Common Sense Media? CSM has always been a great resource to provide age-based media reviews for families for books, movies, apps & technology and more. They now have added some thoughtful coronavirus resources for parents as well. Look for the link on the top-right of the main Parent Resource Page.

Please contact me if you have questions or need further resources

KCLS has many resources for students! Follow these links to learn more!